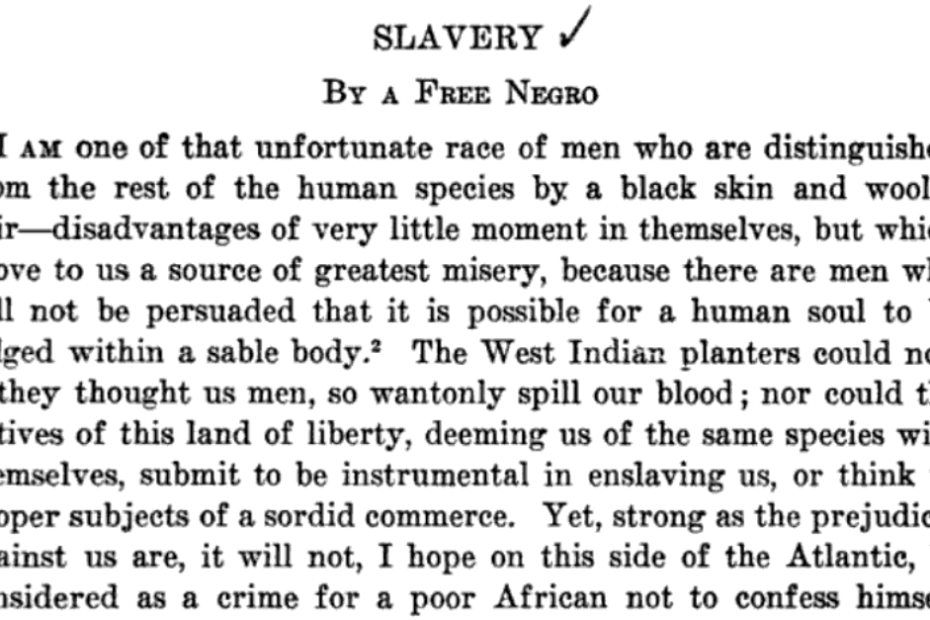 Many of our posts thus far have featured events, works, and accomplishments attributable to known and named individuals. However, today we hope to honor the legacy of an unknown Black orator and author, who spoke and wrote about slavery in the late 1700s. This author’s writing was published in the “American Museum” journal in 1789, and is sometimes referred to as “Negro’s Letter on Slavery” or “Slavery by a Free Negro.” What we know about this author is limited — but from his writing, we know that he was a former slave of West Indian descent, who was granted freedom and the opportunity of education. His work is among the first documented pieces of anti-slavery writing from a person of African descent and would guide and inform subsequent anti-slavery writing for years to come.

We’ve included a few excerpts below from this publication and encourage you to read the full text at blackpast.org (An Unknown Free Black Author Describes Slavery in 1789).

“I am one of that unfortunate race of men who are distinguished from the rest of the human species by a black skin and woolly hair—disadvantages of very little moment in themselves, but which prove to us a source of greatest misery, because there are men who will not be persuaded that it is possible for a human soul to be lodged within a sable body.”

“…I have labored to understand the true principles on which the liberties of mankind are founded, and to possess myself of the language of this country in order to plead the cause of than who were once my fellow slaves, and if possible to make my freedom, in some degree, the instrument of their deliverance.”

“It is the character, I grant, that our inhuman masters have agreed to give us and which they have so industriously and too successfully propagated in order to palliate their own guilt by blackening the helpless victims of it and to disguise their own cruelty under the semblance of justice.”

“Are then the reason and morality, for which Europeans so highly value themselves, of a nature so variable and fluctuating as to change with the complexion of those to whom they are applied?—Do rights of nature cease to be such when a Negro is to enjoy them?—Or does patriotism in the heart of an African rankle into treason?”

Screen capture of “Slavery by a Negro” from “Negro Orators and their Orations” by Carter Woodson, PhD