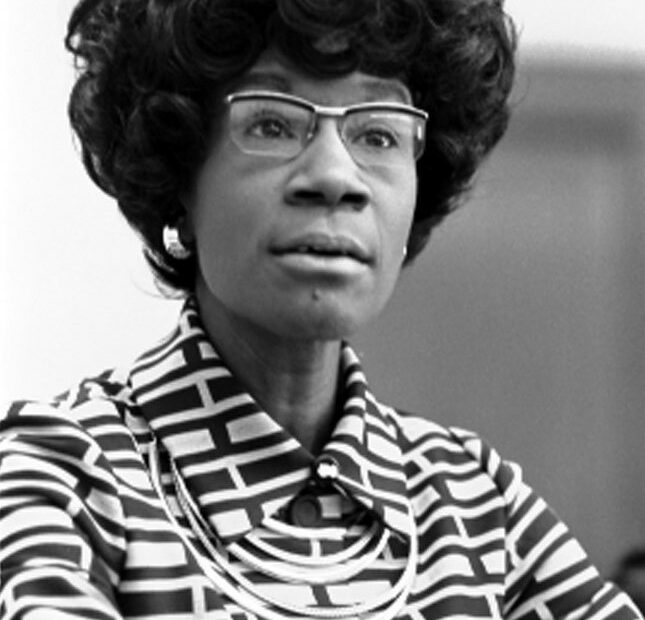 Born in Brooklyn, NY, November 20, 1924. From an early age Chisholm had a knack for constructing cogent arguments, she was a member of the debate team in college, and many of her professors thought she should pursue a career in politics. However, she believed being born both black and a woman would present obstacles too treacherous to overcome.

Despite not primarily pursuing politics in her early career, Chisholm continued her educational pursuits earning her masters degree from Columbia University in early childhood education (1951). By 1960 she was a consultant to the NYC Division of Day Care. Chisholm also continued her fights for equality by becoming a member of the League of Women Voters, National Association for the Advancement of Colored People (NAACP), and other organizations.

Chisholm’s avid work in her community eventually led her to run for the NYC State Legislature, and after some redistricting favoring the Democrats, she ran for Congress in 1968 and won! In her district and beyond she was known as “Fighting Shirley”, introducing more than 50 pieces of legislation, vocally supporting the end of the Vietnam War, and co-founding the National Women’s Political Caucus in 1971. In 1977 she became the first black woman and second woman ever to serve on the House Rules Committee.

In 1972 she pursued the Democratic Party presidential  nomination, but she was blocked from participating in televised primary debates, and even after taking legal action she was only permitted to make one speech. Despite being underfunded and sabotaged throughout her run, she still received 152 of the delegate votes, which is 10% of the total.

In 1983 she retired from Congress, and co-founded the National Political Congress of Black Women. In 1991 she declined the nomination to become U.S. Ambassador to Jamaica due to poor health. Chisholm said of her legacy, “I want to be remembered as a woman… who dared to be a catalyst of change”. Her motto, and title of her autobiography “Unbossed and Unbought” further illustrates how Chisholms mindset and work helped pave the way for countless women and minorities to pursue political office, and also to pursue leadership positions in their careers. She wasn’t alive to see Barack Obama win the presidency, or see Kamala Harris win VP of the United States, but she was certainly a catalyst for those outcomes.

“No Known Restrictions: Congresswoman Shirley Chisholm Announcing her Candidacy for President by Thomas J. Ohalloran, 1972 (LOC)” by pingnews.com is marked with CC PDM 1.0